A LONG WEEKEND IN AMSTERDAM 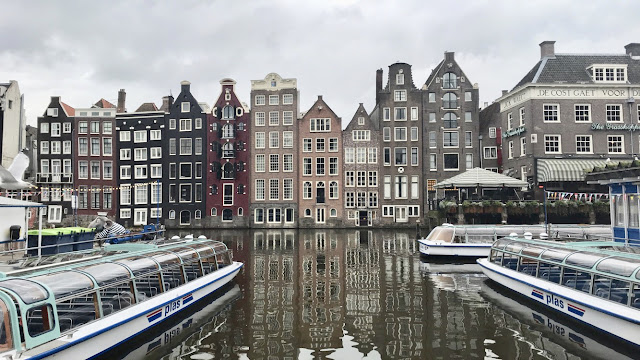 I feel like my social media is always filled with pictures of Amsterdam and I finally had the chance to go, thanks to my friends who are doing internships over there this year. We went for 3 nights but I'd love to go for longer, there's still so many things to see and do.

It is such a beautiful city and it feels like you're in all of the Instagram pictures that you see when you walk through it. Although, sometimes when you see a beautiful building, there can be a half naked woman stood at the bottom,which took me by surprise every time. I was definitely too British for that part of Amsterdam.

When we arrived in Amsterdam, one of the first things we did was try MOAK pancakes. I was boring and went for just blueberry pancakes but it was the best option. The pancakes were so nice I didn't need all of the works. They even had cheese and onion pancakes? 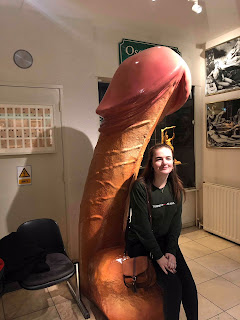 In light of our lads on tour themed trip, we did what lads would do, we went to the Sex Museum. I have to admit, I just wanted to get a touristy photo next to the giant willy and I did! Other than that I don't really remember much except from photos of naked people everywhere, standard. Entry is only 5 euros though, definitely worth it for a laugh.

Amsterdam is quite an expensive city and we were very ambitious with the amount of euros we took out, we did have to get more. But it's worth it, we had some good food. My favourite food was the Stroopwaffels. If you know me, you're probably bored of me talking about these but they are so nice! I found a Dutch shop in London and I now have 4 packs at home. Obsessed!

Another one of my favourite things about Amsterdam is that on every other street they have cheese shops that do little free samples of cheese! On the last day we had already done everything we wanted to do and didn't have much planned so we went on a kind of free cheese crawl. I am actually surprised I can still fit into my jeans after Amsterdam, honestly.

We were so lucky to be able to stay with friends who took us to do such nice things. They took us on a boat tour around the Amsterdam canals which was so pretty and they took us to De Hallen which is a big food hall with lots of different types of food. It was a bit like an indoor Camden market if I'm describing it in Brit terms.

The weather was not great, it was freezing and really rainy but that's no different to England right now really and it didn't really affect anything.

I almost forgot to mention that we went around the Anne Frank House. This is probably the top thing from our trip that I'd recommend to anyone. It was so emotional and so interesting. Tickets for this need to be bought online in advance, probably prior to your trip because it's a busy attraction but tickets aren't too expensive.

Let me know your favourite place to travel to or where you'd most like to go!

With special thanks to Maddie and Maike for making sure we had such a good time in Amsterdam.