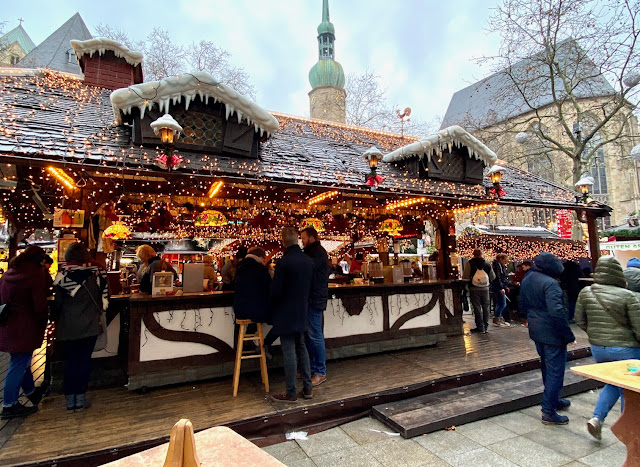 In December, I had the pleasure of visiting Dortmund, Germany just before Christmas. I went with my family, boyfriend and family friends. My dad drove us there and we caught the Euro tunnel which was exciting because I hadn't done that before (I am rather easily pleased).

It took quite a while to get there from the UK as expected but I didn't care that much because my mum had made her famous sausage rolls which are to die for! Once we arrived in Dortmund, we got straight to the best bit without hesitation: the Christmas markets.

I had never actually been to a Christmas market in Germany before. Obviously, I have been to the rip-off versions that we have in the UK that literally do rip you off, with extortionate prices for half the quality. But no, the Germans really do it big. Down every street of Dortmund there were more and more markets, with everything from gluwein (German mulled wine) to candle holders your nan would like.

Before going to Dortmund, I was a bit worried about what I would eat because I am probably the fussiest eater in the whole of England, maybe the world. I don't really like German sausages so what was I going to eat? They actually had so many other options which I was so happy about so I could eat to my hearts content, and that is exactly what I did.

Incidentally, my family actually lived in Dortmund, mum for 20 years and dad for 6 years. It's where they met and had my brother. I know, so cute. As a result, they knew all the best places to go for drinks and shopping. They took us to a huge supermarket where I literally bought the whole chocolate aisle. I am still trying to get through my stash of German chocolate now.

Going to the Christmas markets just before Christmas is the perfect opportunity to buy Christmas presents for your loved ones, and yourself. My favourite items the markets sold were the Dortmund Christmas liquor, German nutcracker men and obviously anything food based.

We only stayed in Dortmund for 2 nights which was enough to go round the markets if that's what you would do all day. However, if you would want to do other things whilst you were there such as visit Bergen Belsen Concentration Camp, then I would suggest going for longer.