So as promised from my last blog, I am going to tell you about my weekend seeing Bring Me The Horizon and Catfish and the Bottlemen live and about seeing Bastille last Friday. 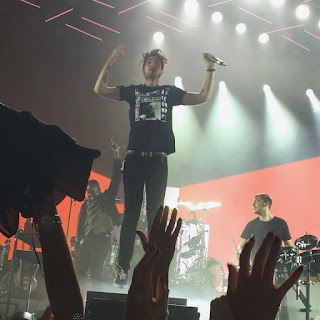 First of all, I will talk about my time seeing Bastille last Friday. It was an amazing night but before this me and my friend Robyn who also came to watch Bastille had a late lunch out in The Cosy Club which is one of our favourite places to eat. After lunch, we made our way down to the venue and started queuing for about an hour (it felt like forever). When we were finally able to go in, we were happy because we were SOOO close to the stage and had such a good view as you can see from the picture above (apart from at one point there was a human giraffe standing in front of us but we'll forget about that for now). The first support were called Childcare and they were good and the second was called Rationale who was also good but we all know that when you're watching the support acts, you're actually just waiting for them to be over so you can watch the ACT YOU'VE BEEN WAITING FOR which was evidently Bastille. Finally, Bastille came on and we were SOOO excited! They opened up with send them off! and OMG Dan is such a good singer (he's even better looking in person too lol). Once a few more songs were played Dan started going through the crowd, unfortunately nowhere near us, then he went up to the seated area and was singing from there and everyone was getting selfies with him, it was so cute. When we came out of the venue, it was a couple of days before Halloween on a Friday night so we saw loads of people dressed up ready to go on a night out and of course, we got a McDonalds on the drive home ha ha ha. 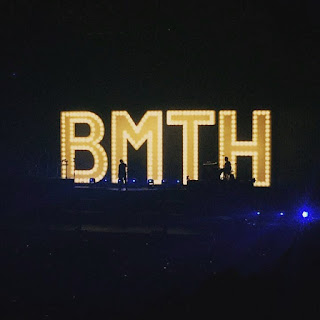 A week later on the Saturday just gone, I had Bring Me The Horizon booked for the O2 in London with my friend Megan. Before this, we decided to spend the day in London with two other friends. When we got to London we thought it would be a good idea to go shopping in Westfield shopping centre in Stratford, turns out this wasn't a good idea because there was a football match on at West Ham so it was BUSY AF. Then we went so see the London eye and Big Ben which was cool because I got COOL selfies in front of them. After that, we went to Oxford Street because I desperately wanted to go to the Lush as I've never been to that one. CAN YOU BELIEVE THAT?! It's safe to say that I LOVED IT! It was the first Lush I'd ever been to with more than one floor OMG it was like my Disneyland! But being Saturday, Oxford street was so busy, just like the rest of London and I just felt like I was in a bowl of human soup. Finally we went back to the O2 which incidentally has EVERY RESTAURANT YOU COUD EVER THINK OF, then we went into the arena. Luckily, we were seated so we could go in whenever we want without having to queue and it was more comfortable because we were TIRED AF after our day out in the London soup. Also, if we were standing we probably would have died in the giant mosh pits, they were cool to watch from where we were as we had really good seats but wouldn't have wanted to be down there LOL NOPE. We missed the first support act called Basement which I didn't mind as we'd never heard of them but we arrived just in time for Don Broco ( I love them too lol two gigs for the price of one). Then BMTH came on and it was MENTAL. They are so good live! I was so excited when Avalanche and Shadow Moses came on because they are my FAVES and they did not disappoint. On the way out, I saw my friend Luke who I'd met on holiday in Corfu which was so weird because the O2 is MASSIVE how did he even see me?! 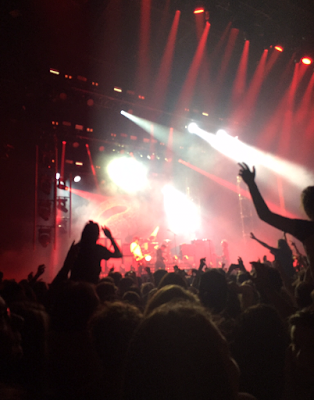 Lastly, the night I had been most excited for had come! I WAS GOING TO SEE MY FAVES (below Lana Del Rey and Arctic Monkeys of course). I didn't really like the support act July Talk, I just couldn't wait for Catfish and the Bottlemen to start. I'd been waiting to see them for two years and it was worth the wait they were amazing! The crows was weird though, we waited so long before they came on and we were so close to the front but as you can see from the picture, we got pushed further and further back. Before Catfish came on, these people came around everyone asking if they knew who Van McCann was (obviously that is the lead singer of Catfish) and a lot of people there actually had no idea who he was which was funny to watch. As expected, everyone went FULL ON MAD when Catfish came on (including me). We got pushed around so much that me and Megan ended up on the floor ha ha ha. Then I felt someone spill their beer into my mouth EW HA HA HA, I hate beer. People kept coming past us to leave because they were panicking and wanted to get out, I thought that would be me at one point but I powered through because I didn't wait two years for nothing! Beer continued to be thrown lol, is it really a gig if you don't get elbowed in the face and smell like beer at the end? Catfish and the Bottlemen were so amazing live, one of the best gigs of my LIFE (so was BMTH probably).

P.S! I applied for uni, just waiting on my college to give me references then my application will be sent off. WISH ME LUCK! Thank you so much for reading. Comment below who you have seen live and who was your favourite :)